by CryptocurrencyNews
in Bitcoin (BTC)
55 3
0

Just like one year ago, Bitcoin appears set to accelerate out of 2021 with brand new all-time highs amid greater levels of adoption among retail investors and their institutional counterparts alike. But how big can BTC get? And is anything left to block the cryptocurrency’s path?

Of course, we’ve been in this position before. In spring, we saw Bitcoin rally to an all-time high of $64,804.72 on the 14th of April around one month prior to suffering a harsh correction that saw more than 50% of the value of the asset wiped off the market. 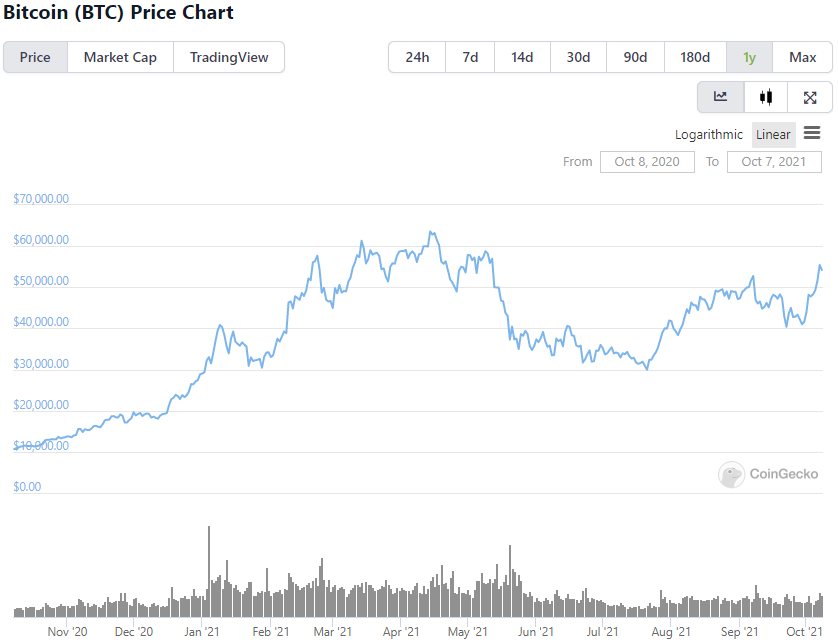 As we can see from the chart above, much of Bitcoin’s trademark volatility was in full swing over the past 12 months. However, the chart clearly shows that late October 2020 was the backdrop to a post-halving bull run that eventually culminated in BTC’s all-time high.

Could October 2021 spark a similarly memorable run? Let’s take a look at how Bitcoin is performing amidst a new wave of investor optimism:

Bitcoin recently rallied to a five-month high after breaking above $50,000, and the coin’s fundamentals indicate that plenty more upside is ready to take place as BTC pushes towards its next stage of resistance.

However, overbought signals indicate that a small pullback may take place on the way to BTC’s next level of resistance, although this would only result in a dip back to its previous support levels between $50,000 and $52,000.

With BTC’s next resistance level set just short of the coin’s all-time high at just under $64,000, we may soon see the cryptocurrency enter price exploration mode in the coming days and weeks.

With this in mind, buyers will need to hold support above $48,000-$50,000 to ensure that the recent rally continues – which may be trickier in the wake of the market jitters that the Evergrande crisis left across a range of assets.

2021 has been one of the most notable years in the short history of cryptocurrencies. Aside from the many all-time high values experienced by Bitcoin, Ethereum and many altcoins over the year, we’ve also seen significant levels of adoption from retail investors and institutions alike.

Elon Musk has emerged as a big fan of cryptocurrencies, having not only invested $1.5 billion in BTC through his company, Tesla, but also in briefly setting up the acceptance of BTC payments for Tesla cars – before environmental concerns later prompted Musk to withdraw the option for customers.

In October, it was revealed that Soros Fund Management now owns Bitcoin, with the fund’s CEO and chief investment officer, Dawn Fitzpatrick, stating that “I’m not sure bitcoin is only viewed as an inflation hedge here. I think it’s crossed the chasm to mainstream.”

It’s also worth recognizing that El Salvador recently became the first nation to accept BTC as legal tender – marking a watershed moment in the global adoption of crypto. 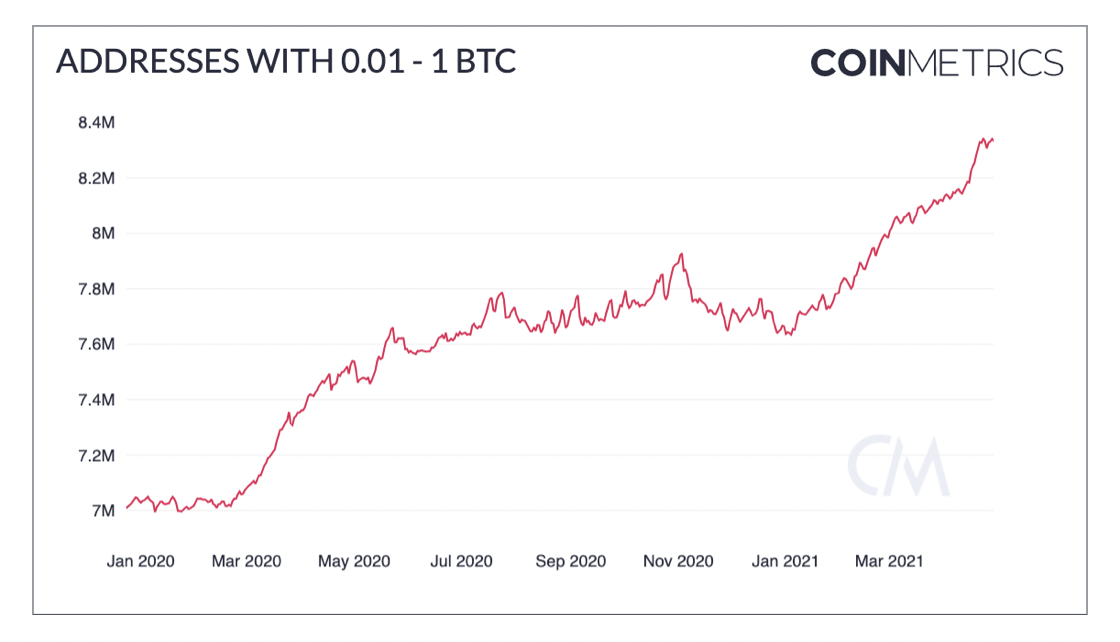 As the data above shows, we’ve also seen a significant rise in the number of smaller-scale investors in Bitcoin.

Wallet addresses with between 0.01 and 1 BTC grew from 7 million to almost 8.5 million in less than 18 months. One significant reason behind this growth in adoption is the expansion of finance technology that’s made it far easier for investors to access cryptocurrencies.

Maxim Manturov, head of investment insight at Freedom Finance Europe, adds that negative interest rates in countries like the US have also played a role in driving cryptocurrency adoption via fintech apps like Robinhood.

“It is important to note that real interest rates in the US have been negative for an extended period,” Manturov said. “Real interest rates will likely remain negative even after the (likely) Fed rate hike in 2022. This is important because negative real rates contribute to higher trading and speculative activity in asset markets. To maintain their purchasing power despite the negative rates, the Americans will be looking to generate income from stocks, cryptocurrencies, precious metals and other investments, and trading instruments.”

How high can Bitcoin go?

So, what can Bitcoin achieve on its current rally? Due to the cryptocurrency’s extreme volatility, the task of predicting Bitcoin’s future value can be extremely difficult, but market experts appear to be largely bullish about the coin’s short term prospects.

According to a recent report by a British bank, Standard Chartered, Bitcoin could break the six-figure price mark before the end of the year – reaching a price above $100,000. Interestingly, the bank believes that the BTC rally will trigger an even more eye-watering bull run for Ethereum – the world’s second-largest cryptocurrency – which Standard Chartered believes may reach $35,000 in value in the medium term, representing growth of ten times the asset’s current value.

Tim Draper, billionaire venture capitalist and cryptocurrency investor, has an altogether more bullish outlook for the future of Bitcoin – claiming that he expects the cryptocurrency to achieve a price of $250k by the end of 2022 or early 2023.

“I’m either going to be really right or really wrong – I’m pretty sure that it’s going in that direction,” Draper said. “Give it about a year and a half and retailers will all be on Opennode, so everybody will accept bitcoin.”

Draper references Bitcoin payment processor, Opennode as an example of a growing technology that will accelerate the adoption of cryptocurrencies even further. In a market that’s driven by emerging technology and widespread investor enthusiasm for the asset, a future Bitcoin price of $250k may well be closer than we think.

The Facebook whistle-blower takes her case abroad. Frances Haugen, who testified at a Senate hearing on Tuesday, has also...

Bitcoin And The Increasing Risk Of Stagflation

The below is from a recent edition of the Deep Dive, Bitcoin Magazine's premium markets newsletter. To be among...